Sometimes when sewing we get a mystery issue. You know the kind, everything looks right but every once in a while the thread tension goes off for a bit and then is fine. Or there’s a noise that catches your attention and then disappears. Or the thread breaks and after re-threading, everything is fine. Sometimes it takes re-threading a few times, changing what seems like a minor variable, and then it’s OK…maybe just for a while….

Or maybe it’s not fine and you take the machine to the dealer and they check it over, re-thread it and everything is fine. Frustrating to not have a clear cut explanation isn’t it?

What follows is one in a series of posts I will be doing on some of the causes of these mystery issues. Yes, there are reasons for some of them. Sadly, these things won’t fix every mystery and sometimes the issue isn’t knowingly or permanently fixed, but this series will give you several troubleshooting steps to go through to help with these things. Sometimes you fix something without really knowing what you did.

The first one involves how your thread feeds. If the thread doesn’t feed evenly, it can cause inconsistent tension, cause the thread to jump out of the proper threading, or breakage.

First, is your thread good? Cheap thread can have tons of lint, inconsistent thickness, even slubs. Old thread gets weak, dusty (hello? dust = lint.) Sometimes even the good stuff can fail us. Maybe you got a spool that was damaged, impacted by a manufacturing issue, or something else. Is it a coated hand quilting thread? That stuff is not good for machines! Leaves a residue in the tension discs and bobbin case, plus is springy, causing twists and loops in the thread path and even in the finished stitch. Some threads are delicate and take extra care with use- special needles, a different spool pin orientation, different tension. Sometimes a rayon spool is grabbed by accident. Rayon is easily broken when used like a polyester thread. Cotton breaks easier than polyester.

I’m not saying don’t use a good rayon or a quality cotton. Heck, sometimes we can even get by with using the cheap stuff. But sometimes the thread is the issue.

Sometimes how the thread is fed off the spool is the issue.

I’m going to finish up this post with just one particular issue about how thread feeds off the spool/cone, but I’ll be writing more about some other variables in this series.

If you are using a horizontal spool pin on your machine (sideways), you need to use a spool cap.

A spool cap (sometimes called a spool holder) holds the spool or cone on the pin. These usually come in two sizes (there’s a third type I’ll talk about in a minute) and are meant to not only keep the spool from coming off the pin, but to hold the thread slightly away from the actual spool. This keeps the thread from getting snagged on the spool, especially if it’s an older spool with the notched edges and a slot cut in it for the thread end.

It’s not necessary for the spool cap to hold the thread tightly against the attached end of the spool pin. I like to let there be enough space that if the thread pulled on the spool as it unwound, that the spool could rotate. This would keep it from jerking.

Nobody likes jerks, especially your machine. In fact a jerk can cause the machine to get its thread in a wad. (If your brain substituted panties there, it’s ok.)

In our shop, we still see some vintage/older/mature/aged sewing machines. Some of these machines do have the horizontal spool pin, but may also have a separate spool cap-like piece that is meant to be on the pin before the thread is placed on it, then a spool cap to hold the thread in place like above. If this base is missing, thread might get hung up at the base of the spool pin or rub against the machine.

Obviously, if these spool caps get damaged, nicked, dirty/sticky it can cause the thread to occasionally get jerked or feed poorly. Keep them clean and in good condition.

I mentioned a third type of spool cap earlier, and now I’m going to tell you about this wonderful little Janome item. This tiny little savior of my thread collection debuted with the Skyline S5 and has come standard now with most of the newer, bigger machine models. Many people (dare I say some Janome dealers) might not realize its potential, but it can be used on nearly all Janome machines on the horizontal spool pin. It can also be used on Kenmores, Elnas, and other brands of machine. I don’t know if other brands other than Janome and probably Elna have a similar part. I order these lovely little special spool caps as a replacement part by the dozen or more.

Why are they so awesome? Well, there are new threads out there that are cross-wound onto cones; my beloved Glide, Cairo Quilt, and the bigger sized Aurifil for example. These threads don’t want anything to come between the top of their cones and the machine. Maybe you’ve been doing this: 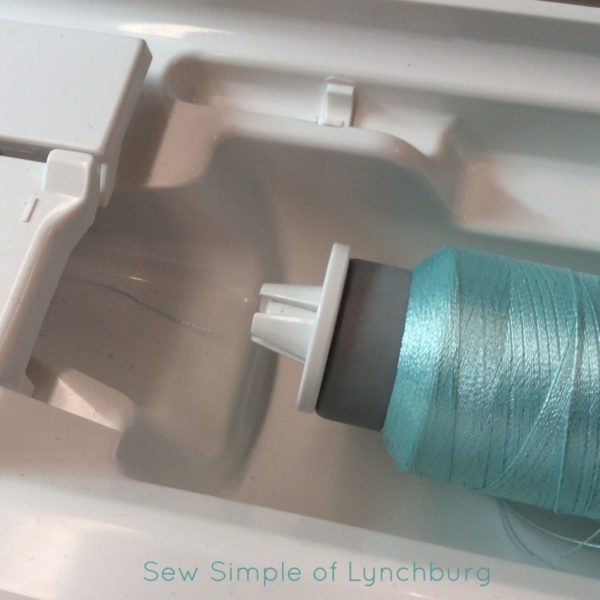 But what you need to do is this: 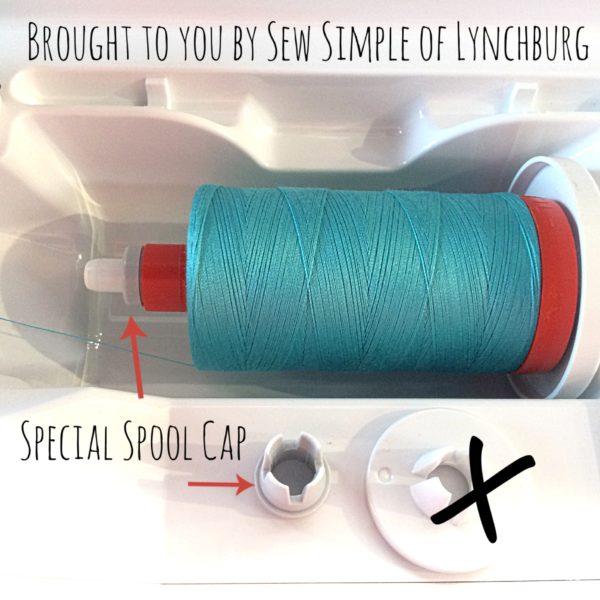 This cute little special spool cap is made just for these types of threads. As the cone gets smaller, there’s a bigger chance that the thread can loop around these other spool caps.

This is just one of many things that can solve your mystery issue. Can you get by with using the other spool caps on these types of cones? Probably. We’ve all done it from time to time, I’m sure. But it’s another thing to check when you have those intermittent mystery issues.

Spool caps are cheap. Messing up a great quilt/project or an unnecessary trip to the repairman isn’t. (BTW, if you aren’t local, we sell this special spool holder at Amy’s Quilting Adventures.)